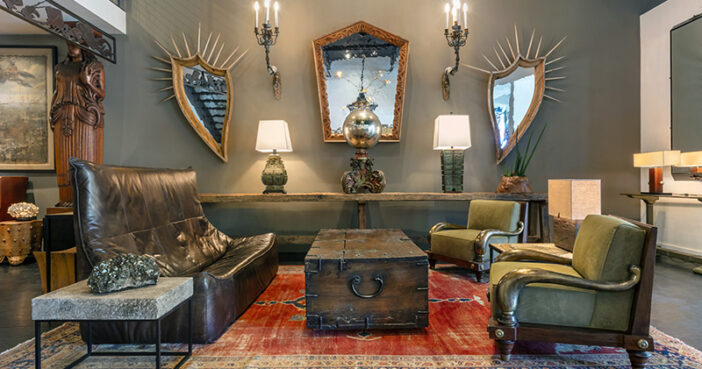 Los Angeles has long been a city of great design.  Craftsman homes, despite originating in England, really came into their own here.  Charles and Ray Eames, through their Venice-based Eames Office, held an incredible amount of influence over the direction of Modern design and architecture. Today, one needs to look no further than the sheer number of design resources scattered throughout the city to see that Angelenos still take their décor very seriously.

For the past few decades, most of those resources sat clustered around West Hollywood’s Pacific Design Center. A majority of the city’s high-end rug companies, antique stores, and furniture retailers lined up along Melrose Avenue or in the La Cienega Design Quarter, although a few outliers existed in the Media District as well.

J.F. Chen, which first opened in the 1970s out of a modest storefront on Melrose, became an early adopter of the Media District as a home base. Since then, the showroom has expanded into multiple spaces and deals in everything from centuries-old antiques to pieces by Jean Prouvé, Kaare Klint, and Florence Knoll, to works from contemporary artists. To understand the true scope of J. F. Chen’s inventory, consider the 2016 “Collecting Eames” exhibit at which the showroom had more than 450 pieces of Eames furniture from its collection on display.

In 1993, Adam Blackman and David Cruz purchased a former gay nightclub on Highland Avenue and turned its 9,500 square feet of space into a chic showroom/atelier. Known for an exquisitely curated mix of traditional pieces (painted French cabinets and rustic farm tables) with the esoteric (a clay pitcher shaped like an Aztec head or a department store stocking display), Blackman Cruz quickly became a must-visit resource for the city’s top interior designers.

Several years would pass before other design-centered businesses would follow suit and come to the Media District, but eventually, come they did. In March 2017, for instance, Ralph Pucci opened West Coast outpost of his business on McCadden Place. Its façade, covered in colorful murals from artist Rebecca Moses, sets the tone for what one can expect inside: an open space that’s more gallery than showroom with its furniture arranged and displayed as objets d’art.

“Ralph thought this neighborhood had the potential to really become a design hub,” said Chris Kapov, West Coast Director of Ralph Pucci and member of the Media District Board of Directors. “At the time we moved, J.F. Chen and Blackman Cruz were the only ones here. Ralph felt that this area would hit critical mass at some point, and he was right.”

Next door, New York-based interdisciplinary design studio, Apparatus—best known for its sleek collection of lighting, furnishings, and accessories—set up its own West Coast flagship in a former warehouse and production studio that offered a blank-slate environment to present its designs.

“Designing our Los Angeles gallery allowed me to experience the city I grew up in differently; to express the studio’s design ethos through an idealized version of California,” said Gabriel Hendifar, Artistic Director and Founder of Apparatus. “With that said, being neighbors with Ralph Pucci and J.F. Chen was a no-brainer. We’re only as good as the company we keep, and we’re so thrilled to be welcomed into the neighborhood.”

McCadden place is also home to Lief Gallery with its curated mix of antique and modern pieces, Paula Batali handprinted wallpapers, and their own line of reproductions.

Mother and son decorators, Clements Design, are also established in the Media District. This duo has outfitted the homes of Ellen DeGeneres and Portia de Rossi; Bruno Mars; and Jennifer Lawrence which is probably why they landed on Architectural Digest’s list of top 100 designers in 2020.

Most recently, interior design powerhouse, Holly Hunt opened her flagship Los Angeles showroom in the Media District. One of the biggest names in the business, Hunt stocks furnishings of her designs and those of other designers like Jean-Michel Frank, Lorna Lee, and Mark Albrecht Studio, to name a few.

So, is all this competition good for business?

“When another business moves to the BID, all of our boats rise. We all sell different things to the same people,” quipped Kapov. “We don’t really compete with each other, we complement each other.” §